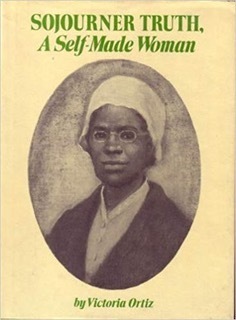 "My name was Isabella; but when I left the house of bondage, I left everything behind."  These were words spoken passionately by the former enslaved woman who was known as Sojourner Truth, a name she chose for herself.

The truths she spoke were the harsh facts of social injustice.  She knew firsthand the cruelty of slavery; she had borne it for thirty years.  And she also knew the frustration of being black in a white society and of being a woman in a country run by men.  In her four decades of public life, Sojourner Truth was an ardent fighter for the rights of blacks and women, a controversial speaker who drew hysterical abuse from some opponents, convinced others of the justice of her cause, and won the respect, admiration, and friendship of some of the great figures of her time – Frederick Douglass, Harriet Beecher Stowe, Susan B. Anthony, Abraham Lincoln.

This account of Sojourner Truth's rise from enslavement to national prominence is an important chapter in American social history.  But it is also a moving and dramatic story, filled with quotations from her speeches and dictated writings that reveal the sharp wit and deep compassion for which she was known and loved.

The story of Justice Ginsburg's life and influence, using the lives of ordinary citizens to illustrate legal principles.

Named one of the year's best books for teens

"...successfully weaves together information about [RBG's] life and major court cases in which she had significant influence."

The story of Sojourner Truth’s remarkable career from enslaved woman to fighter for the rights of Black people and all women.

Español para Abogados/Spanish for Lawyers
First of its kind casebook written in Spanish, for law students and practicing attorneys.