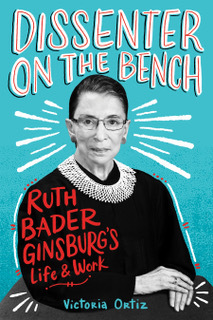 Buy it at your local bookstore!

In October 2003, Savana Lee Redding, a middle school honor student, was ordered out of her class by the assistant principal.  Savana had no idea why she was singled out.  The assistant principal claimed that Savana was concealing illegal drugs in her backpack and her clothing.  He ordered two female school employees to search the girl's backpack and her pants and t-shirt. They found no drugs. Savana was not permitted to call her mother.

Infuriated by the mistreatment of her daughter, Savana's mother contacted a lawyer for help.

In April 2009, Savana and her mother sat in the courtroom of the U.S. Supreme Court, waiting for oral argument in Safford United School District v. Redding. One of the nine justices entering the courtroom -- and the only woman -- was Justice Ruth Bader Ginsburg. The outcome of the case turned on Justice Ginsburg's understanding of the realities of the life of a thirteen-year-old girl.

The story of Justice Ginsburg's life and influence, using the lives of ordinary citizens to illustrate legal principles.

Named one of the year's best books for teens

"...successfully weaves together information about [RBG's] life and major court cases in which she had significant influence."

The story of Sojourner Truth’s remarkable career from enslaved woman to fighter for the rights of Black people and all women.

Español para Abogados/Spanish for Lawyers
First of its kind casebook written in Spanish, for law students and practicing attorneys.